Sorry for the image-heavy post, but I didn't think the entry would look good without pictures. I cut out some of the more boring dialogue and only translated the more interesting parts with Sakurai in them because there's a ton of talking. Hopefully you can get a general idea of what goes on. 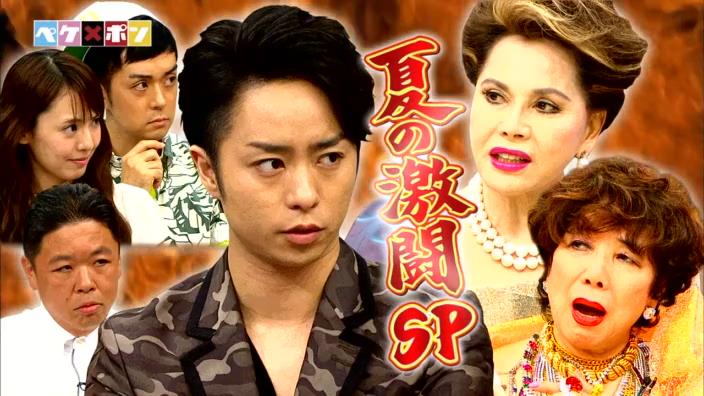 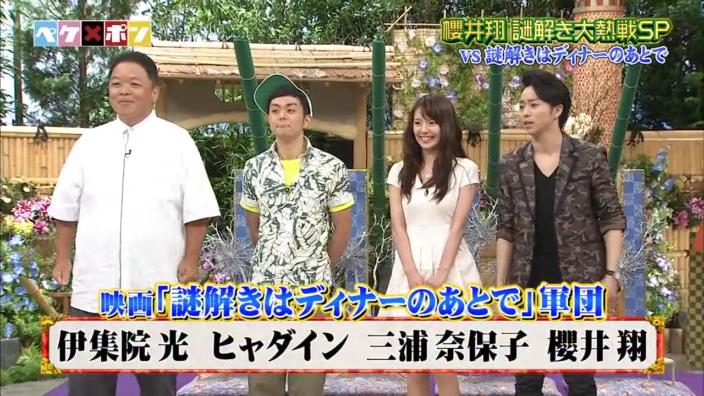 The show starts out with Pekepon team wondering if anyone was in the movie.
Arita: Ijuin, did you appear in the movie?
Toshi and Taka: He didn't appear...
Ijuin: I helped prepare the sets...
Pekepon: Behind-the-scenes?!
Arita: Hyadain, didi you appear?
Hyadain: I helped a little as a soundman...
Pekepon: Behind-the-scenes?!
Ueda: Miura, you also?
Miura: I want to if I have the chance.
Pekepon: You weren't in the movie at all!
Sakurai: Last time News appeared on the show, their loss was atrocious, so as [Johnny's]...
[News: Disasterous defeat with no luck]
(huge overlap, but but what Sakurai says is ironic because his team is neither Johnny's or anyone from Nazotoki)
Ueda: Instead of "Nazotoki Team," why don't you just name your team "Sakurai Team?"
Sakurai: Sorry, but I want to use the name "Nazotoki Team."
Ueda: Why? It doesn't really matter if you use "Sakurai Team"
Sakurai: Well it's because tomorrow the movie "Nazotoki wa Dinner no Atode" will be released. I was able to act in the 2011 drama and so...
Ueda: DESPERATE TO ADVERTISE YOUR MOVIE?
Sakurai: Sorry, but I really want to use "Nazotoki Team," please 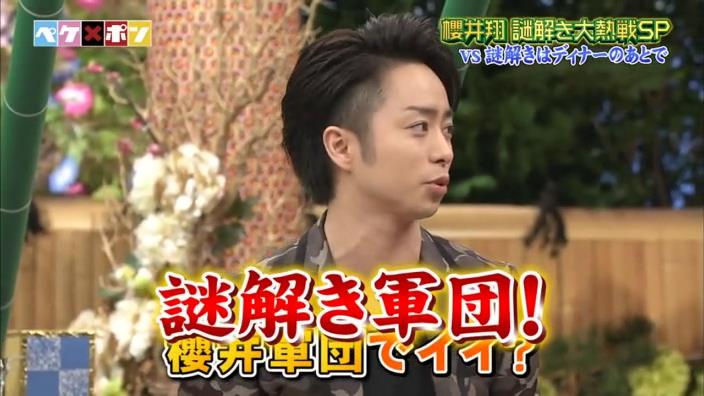 Arita: But the real problem is how are you with those?
Ueda: Ironic poems?
Toshi: Because Sakurai has a marvelous profile of being a newscaster and such, if he can't solve these, it might remain in his profile
Ueda: That's if he can't answer them at all, right? Would you take his place in a news program?
Pekepon: We'll do New Zero!
Ueda: Who will?
Pekepon: We will!
Ueda: Put me in as a candidate too!
Pekepon: You're one for real!
Ueda: Why am I the only "real" one? (t/n: He's does a late-night news show)
Pekepon: It was just a joke! 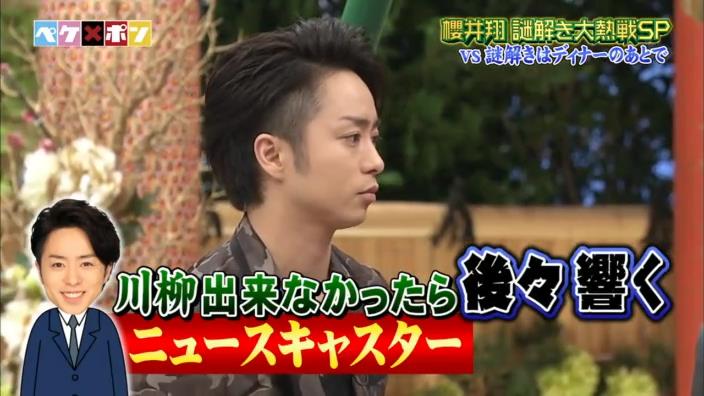 From here on out, it will basically be explaining the ironic poems. These are extremely hard to translate, so please bear with me. I'll translate some of the dialogue in between, but not all of it.

Unusual, an animal that blooms, ○○○○○○ 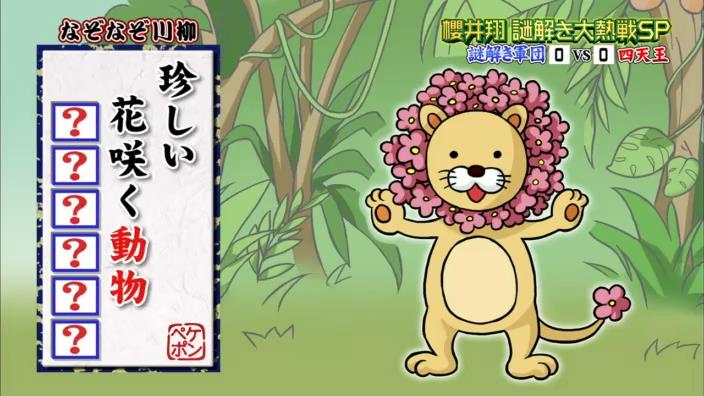 Answer:
Another reading for the kanji 珍しい (mezurashii) is "chin" [the n sort of has an m sound]
A flower that blooms is "pansy"
Chin + pansy = chimpanze
[weird, but it works in Japanese because of the sounds]

Ueda: Sakurai, as expected you'll make it with this team.
Sakurai: With tons of leeway!
Ijuin: If you are helpful to Sakurai, you will be highly regarded by his relatives!
(Everyone laughs) 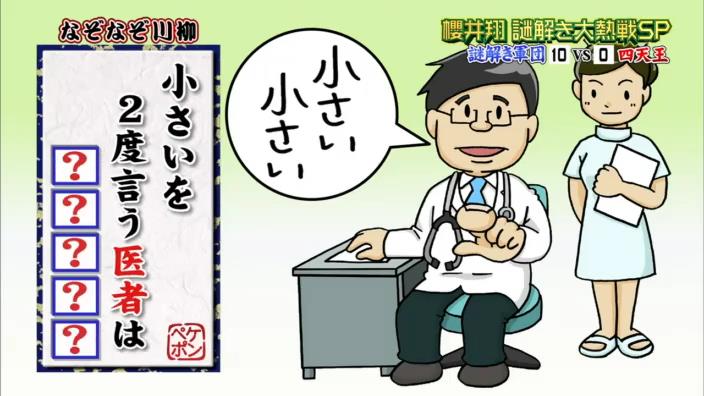 Answer:
Another reading for 小さい (chiisai) is "shou"
Twice is 二回 (nikai)

Sakurai and Miura figured out the answer within the first few seconds of the question being read. 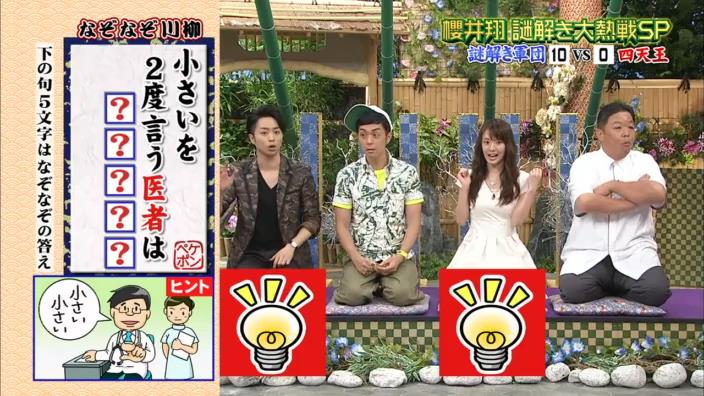 (Before the answers begin)
Arita: Pan, do you know the answer?
Toshi: Who are you calling "Pan-kun?
(Arita is making fun of Toshi who always gets made fun of for looking like a monkey. Pan-kun is from Shimura Doubutsu En.)

(After the answering)
Sakurai: I felt Pan-kun's kindness (t//n: this was for answering wrong, but his answer was almost complete)
Toshi: Who are you calling Pan-kun?
Ijuin: You'll be highly regarded by his relatives!
Ueda: You were a help to Sakurai!
Toshi: Shut up!

Question 3: (this is a hard question to translate)

Another person, a room where love begins, ○○○○○ 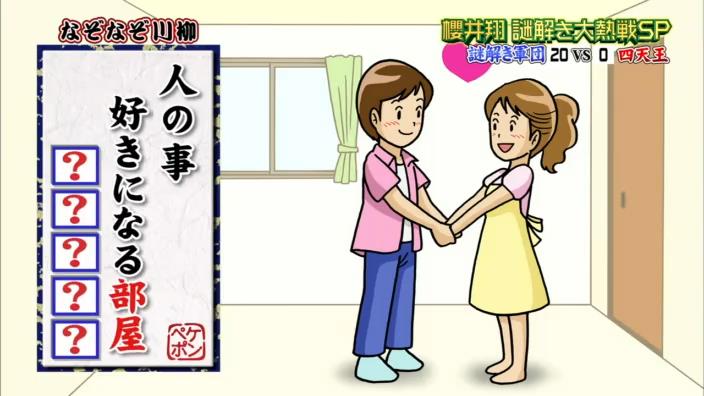 Ueda: Can I ask you for an explanation of your answer?
Taka: I thought that if both people were always in a room together, they would start to like each other.
Pekepon (other members): That maybe so
Ueda: Up next is Hyadain. How about this question?
Hyadain: In reality, I'm good-for-nothing in this line-up.
Ueda: But in the past you came, you've done well...
Hyadain: I've only answered one question correctly out of all those times.
Ueda: Oh, I see. You've answered correctly 1 out of 8 questions. Unexpectedly a piece of junk. All this time you haven't really done anything

Ueda: So, Sakurai, just to make trouble for Inagihara, you really know the answer?
Sakura: I've completely solved the riddle.
Everyone: Really?
Ueda: Well then, here's a hint.
Hint: This room can be used when you go to the beach or pool
Ueda: All right, it's answer time... wait a sec?! On the contrary he's starting to doubt his answer! Does he truly know the answer?
Sakurai: The beach?!
Ueda: Sakura, it's answer time! 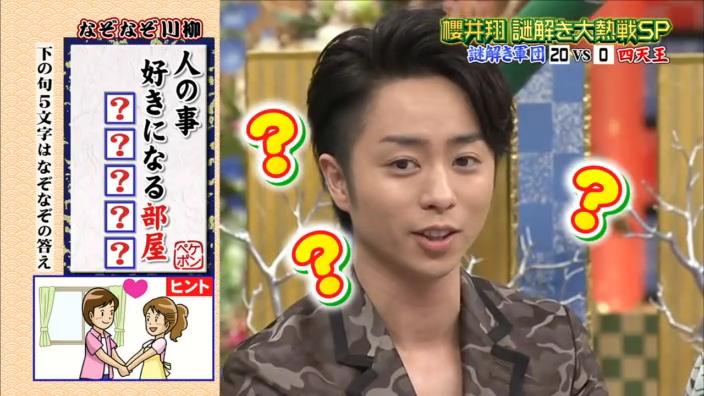 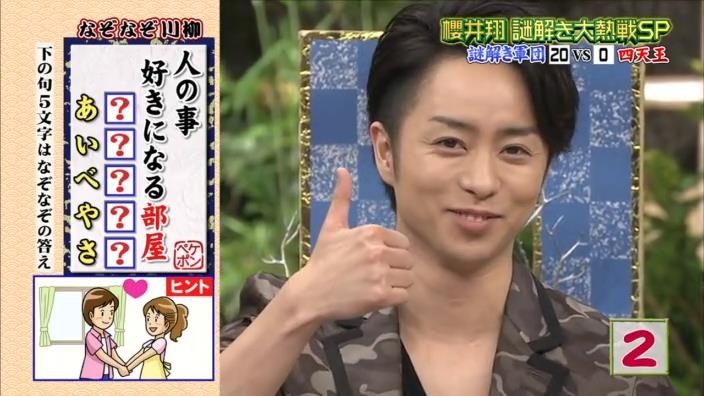 Sakurai: Aibeyasa (相部屋さ) (t/n: Ai (愛 love) + Heya (部屋 room) = Aibeya (meaning share room), but it doesn't fit the puzzle, so he puts a sa at the end)
Ueda: This is uncool! He had such confidence. Moreover, he struck a pose with his answer "aibeyasa"

Ueda: Of course, Sakurai, I understand your answer
Sakurai: I was torn between "aibeyada" and "aibeyasa" (t/n: da and sa don't really mean anything in this case. It's just to fill the empty slot in the answer.)
Ueda: That's trivial in this case 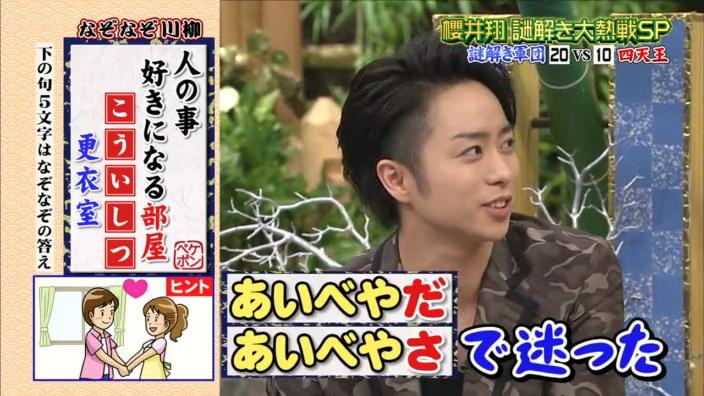 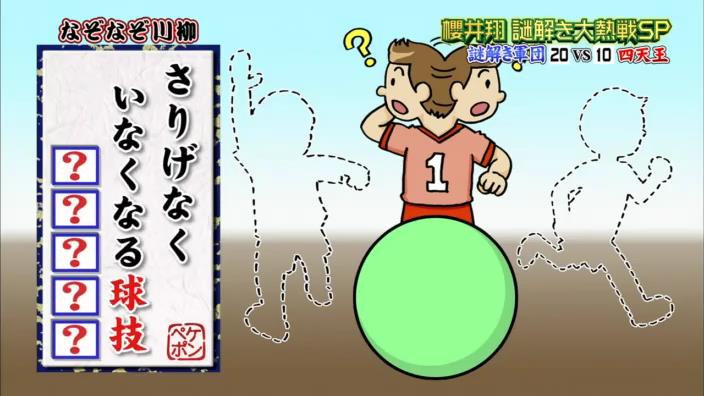 Another word for unintentional in Japanese is "futto."
"Saru" (去る) has the meaning to be gone. It doesn't quite sound right in English though.

Ueda: This question, Sakurai, you of course knew?
Sakurai: I knew this question. The reason is because I've played futsal. The first answer that came to mind was futsal and soccer when I saw the word "ball."
Ueda: However you're "Aha!" came relatively slow.
Sakurai (mouthing): Crap. Crap. Crap. 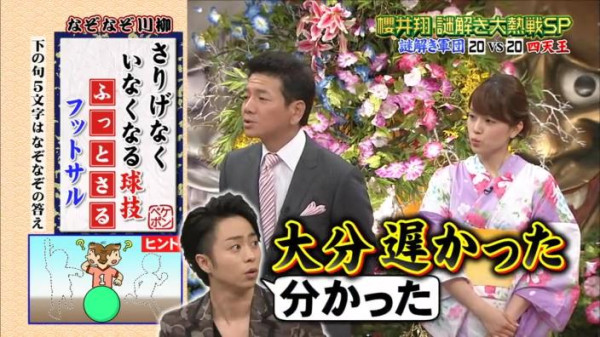